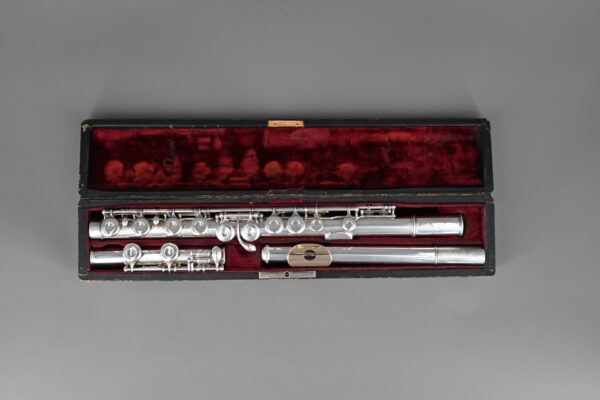 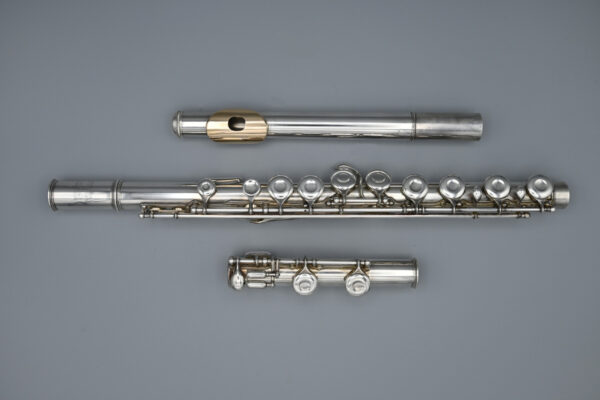 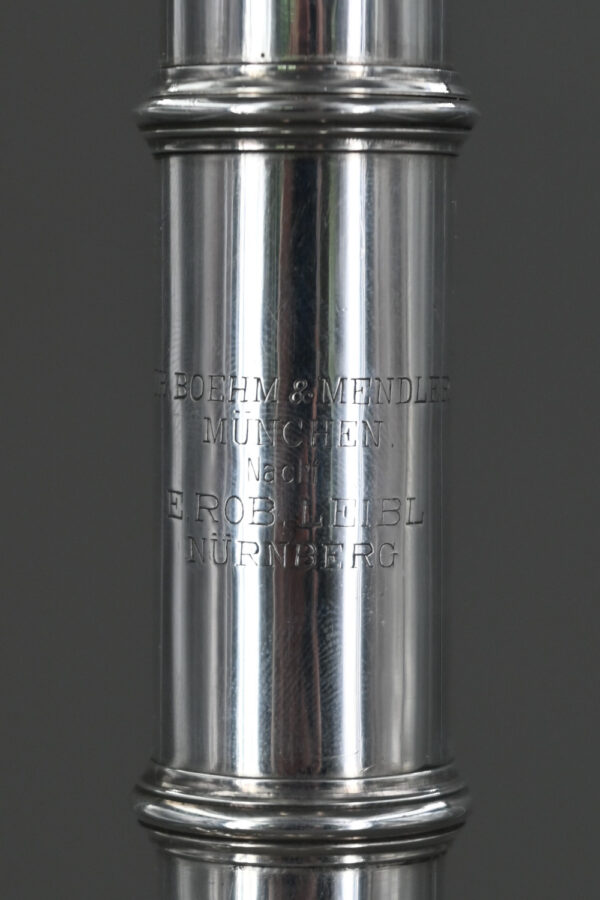 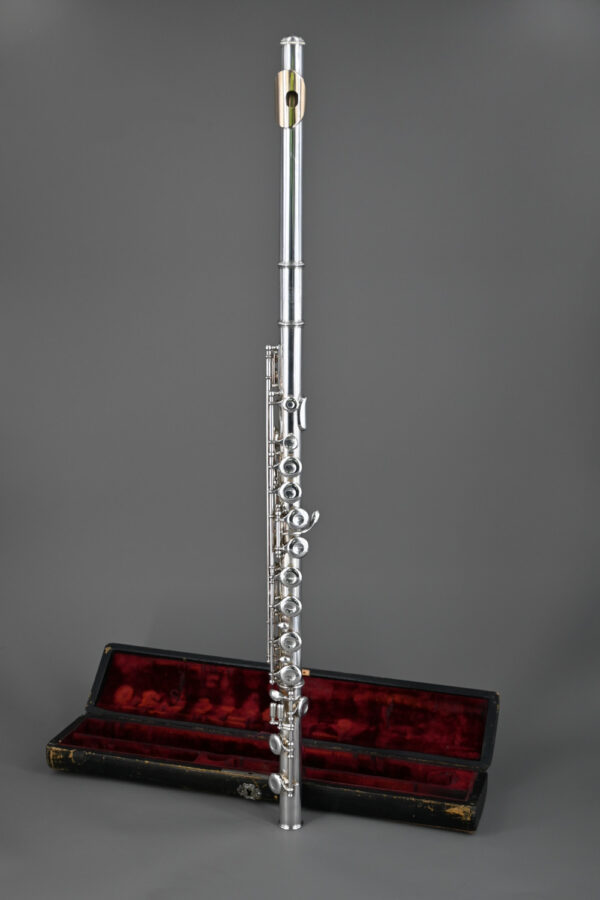 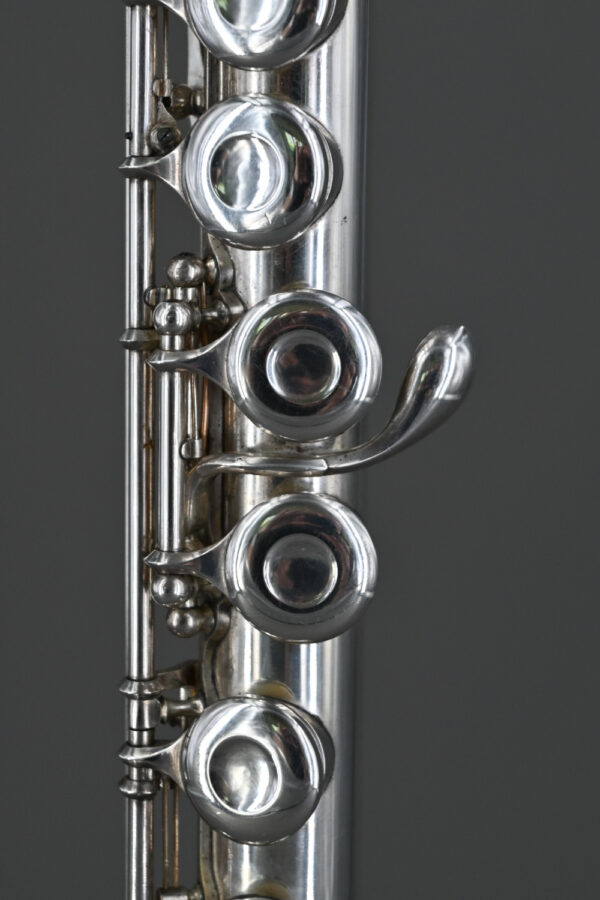 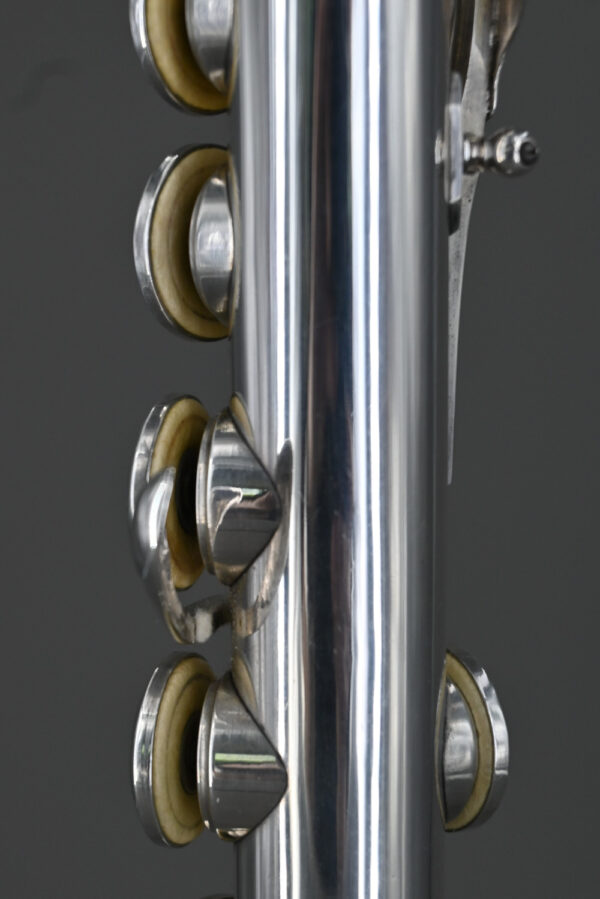 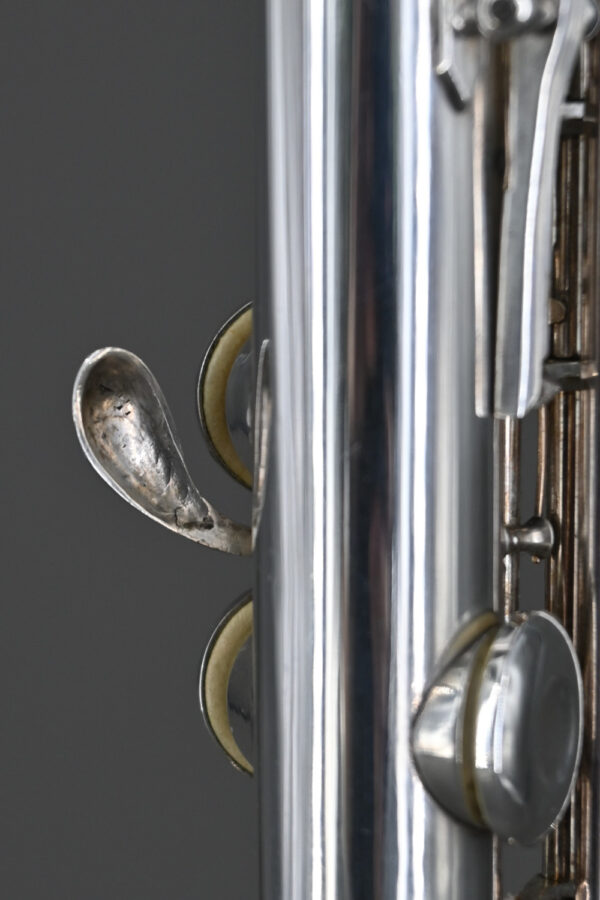 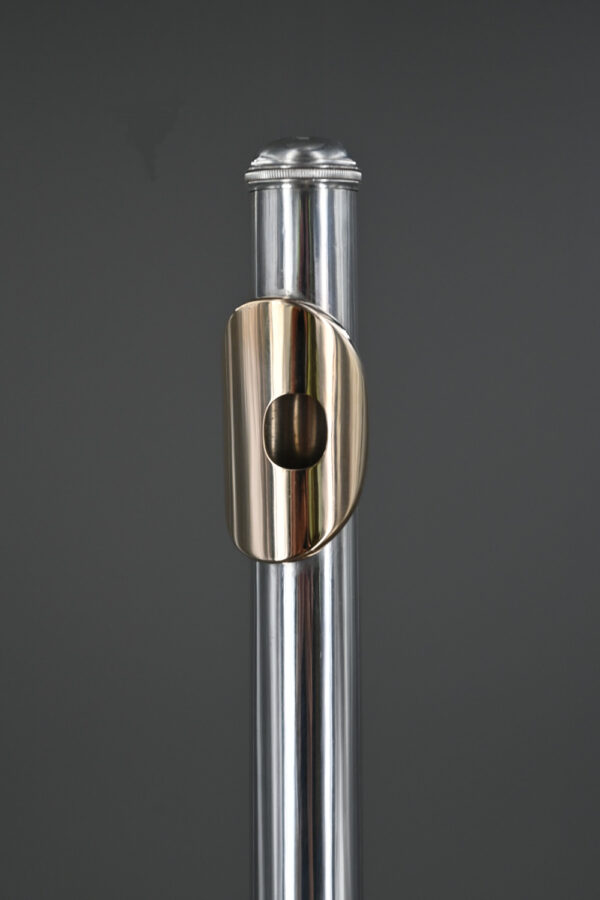 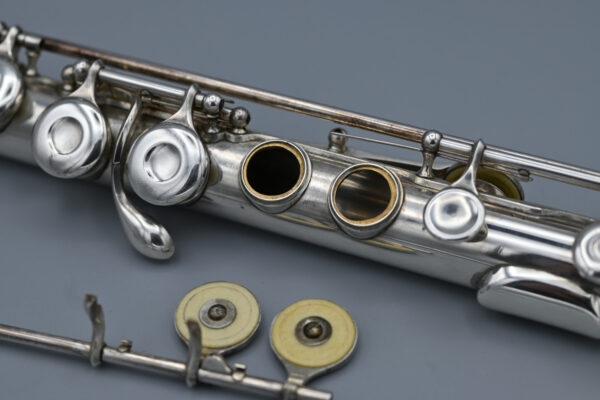 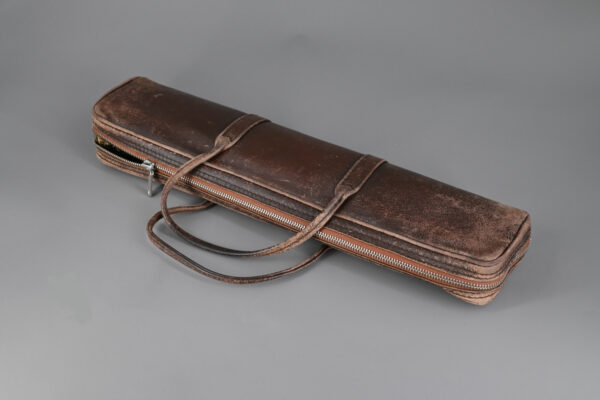 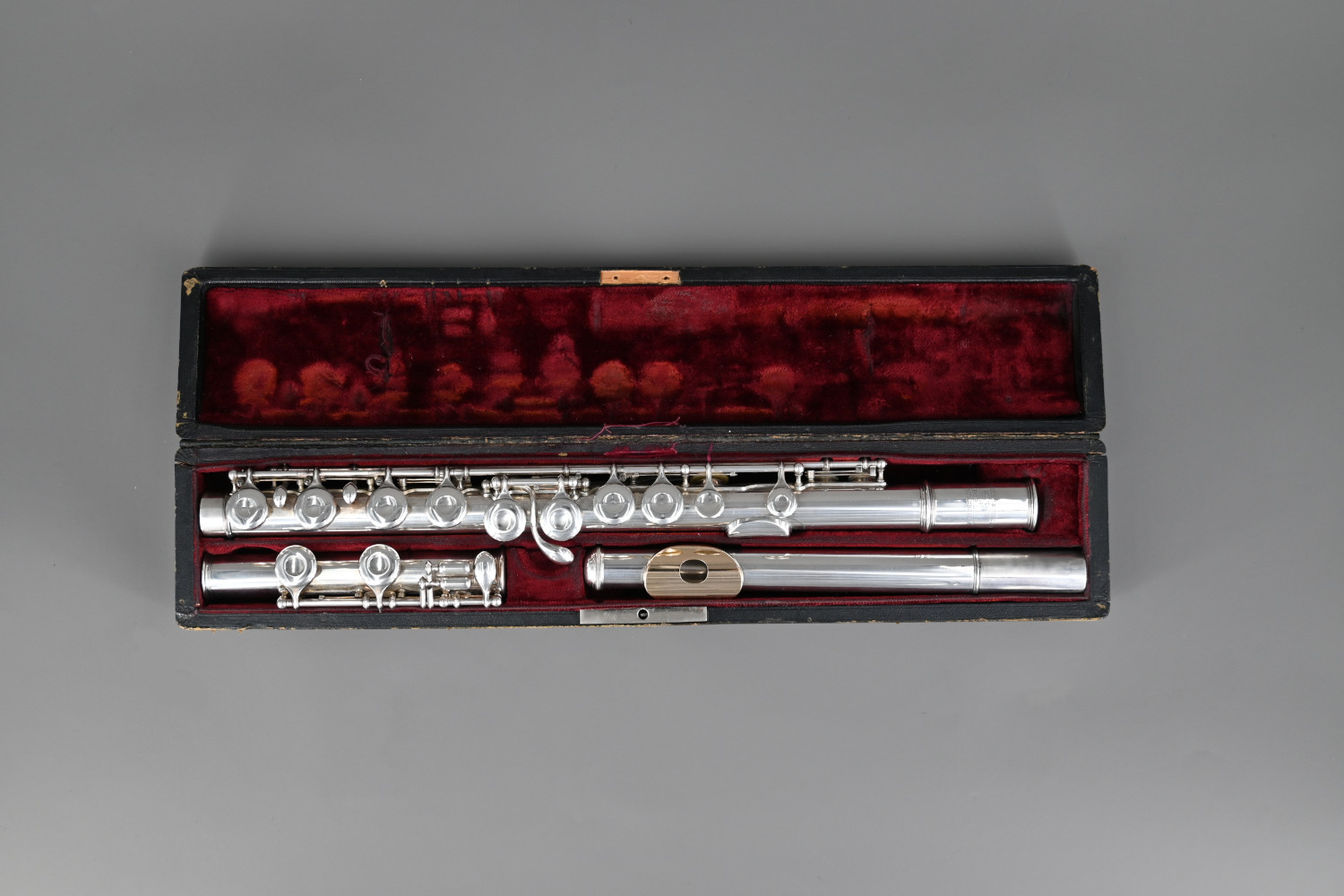 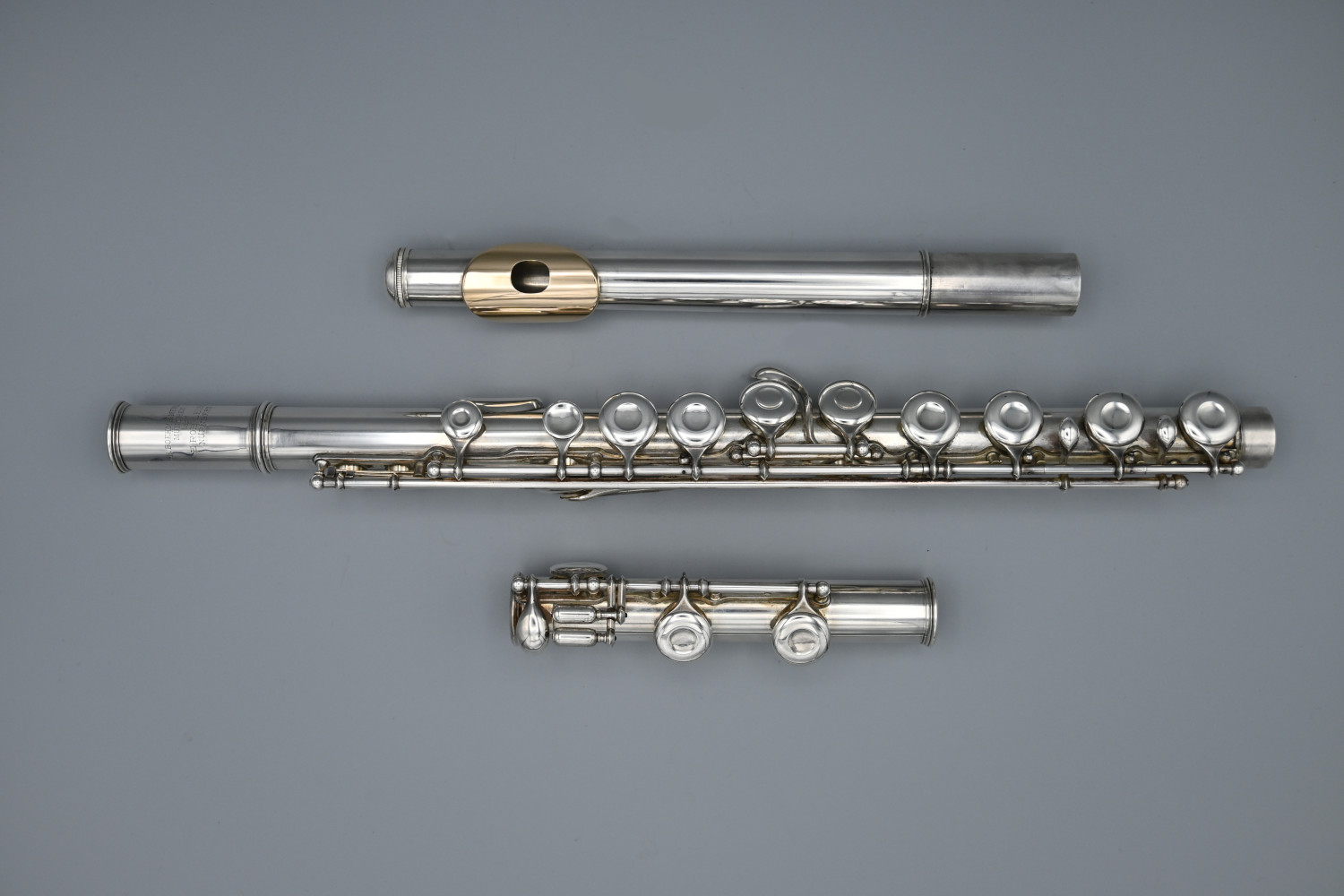 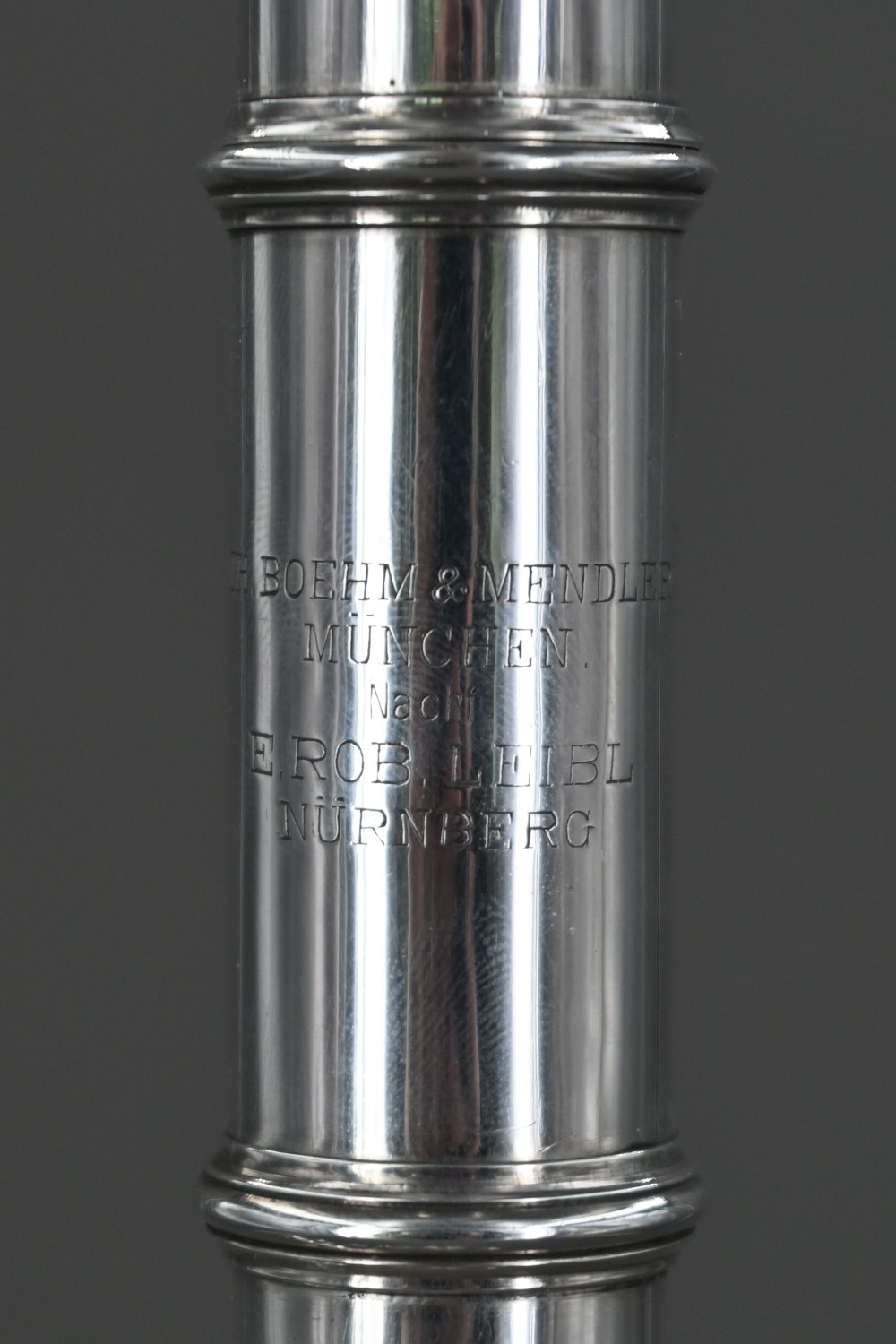 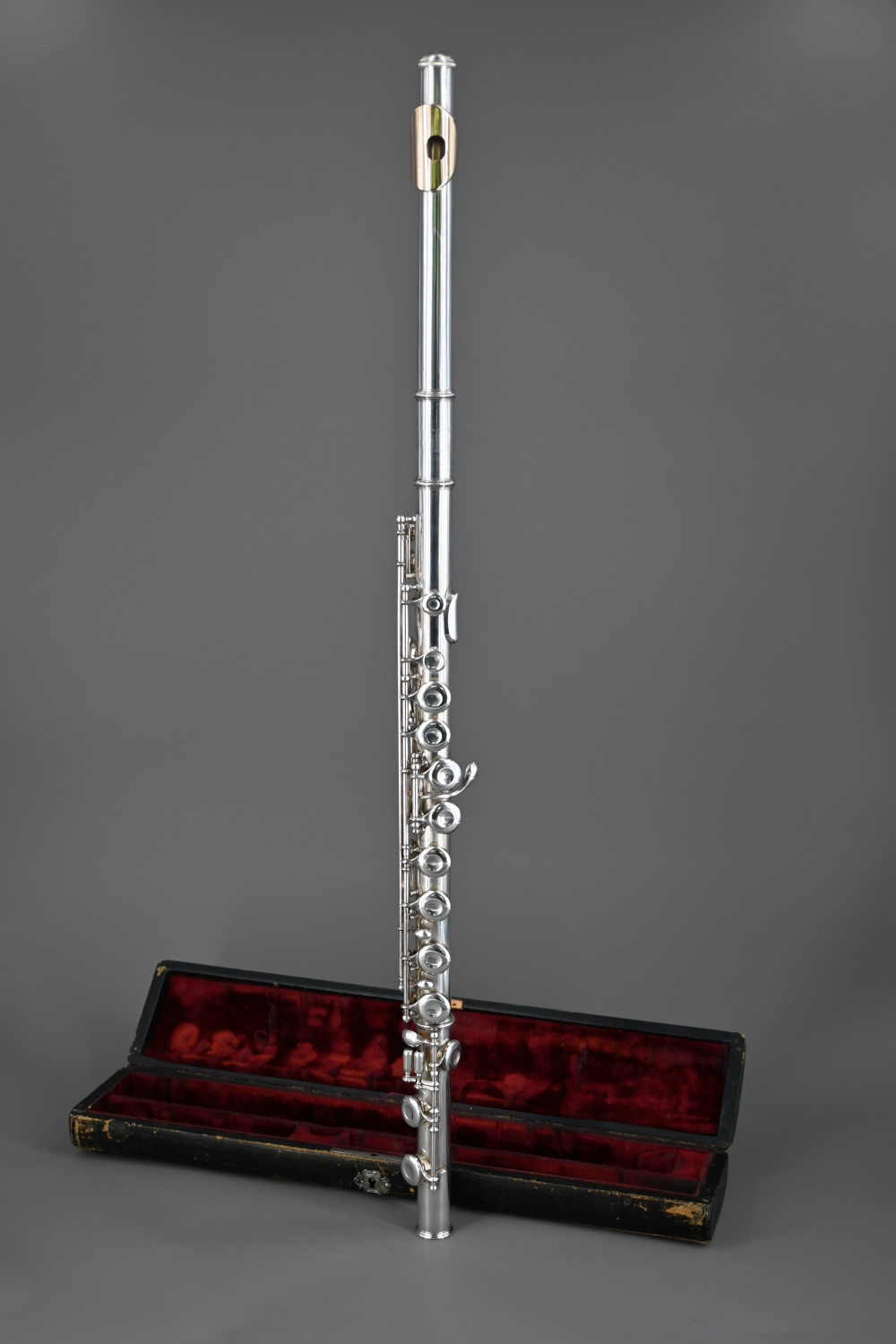 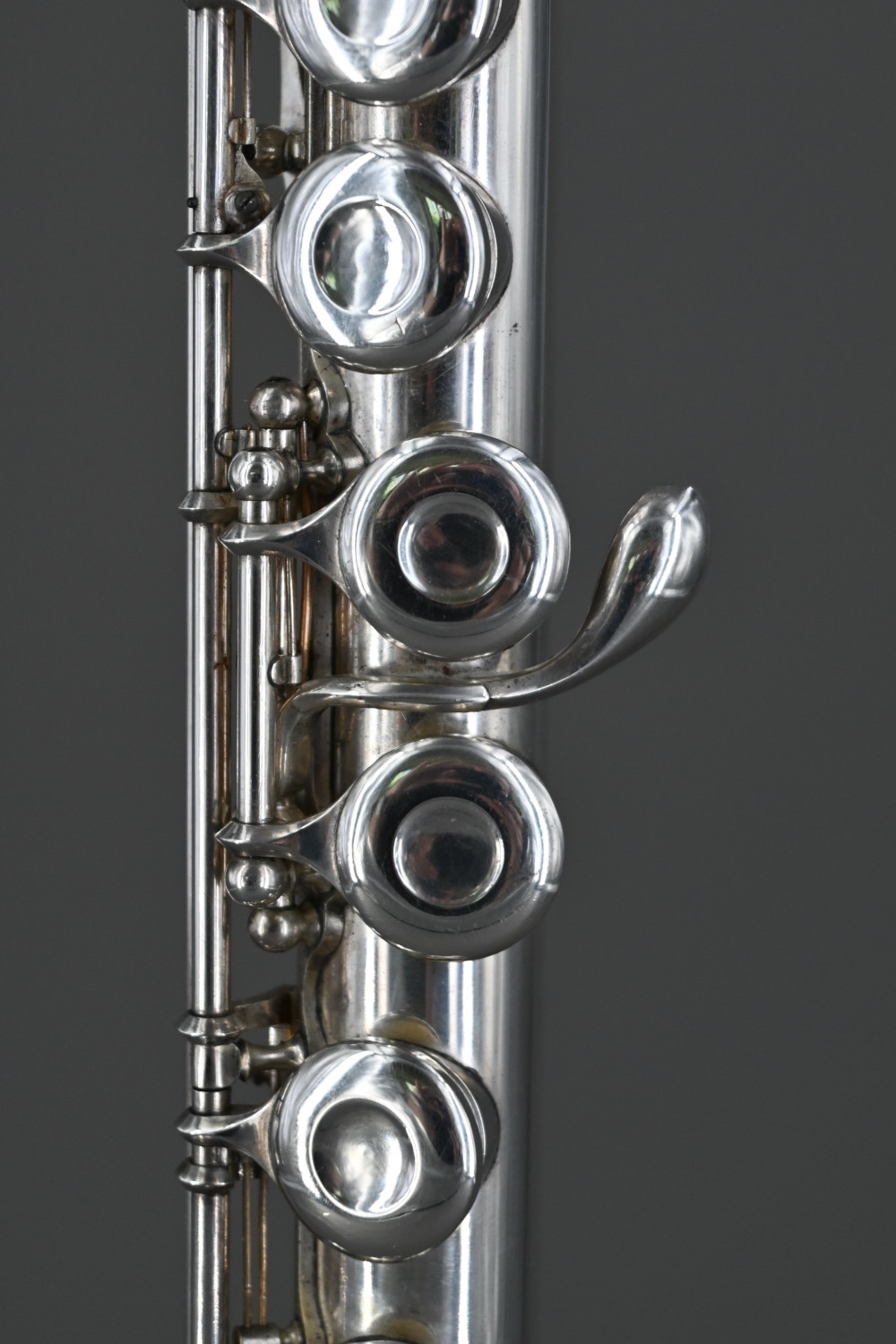 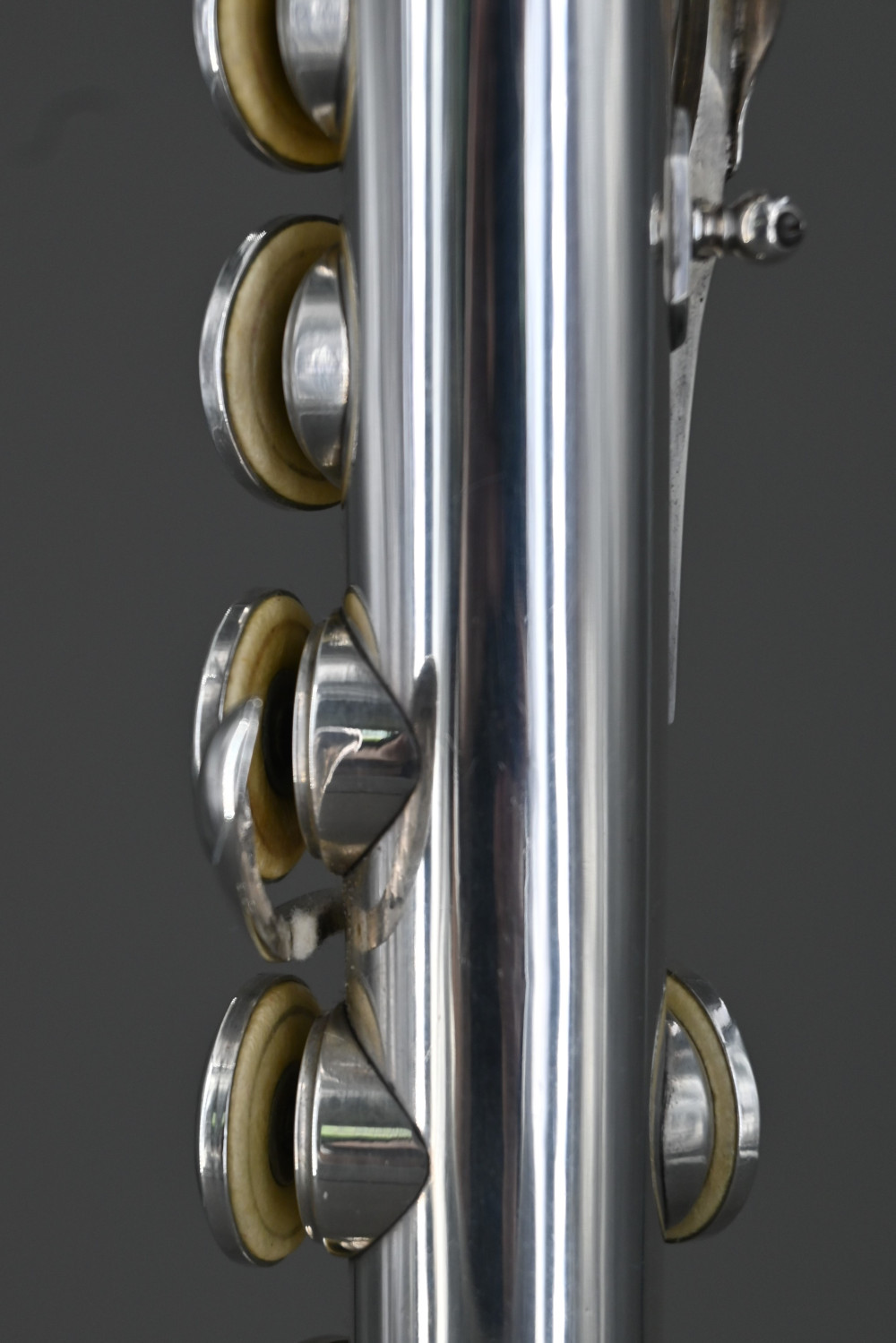 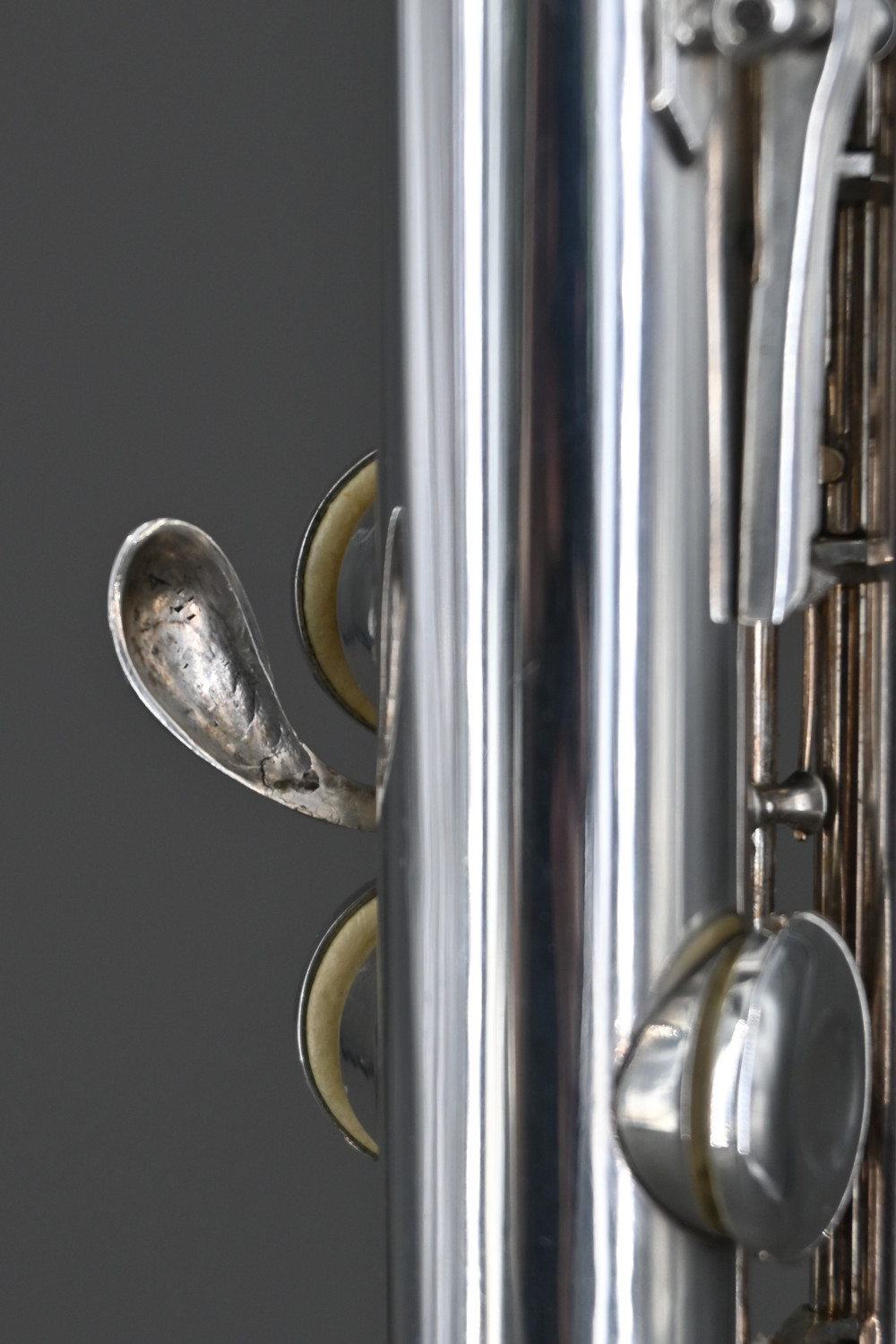 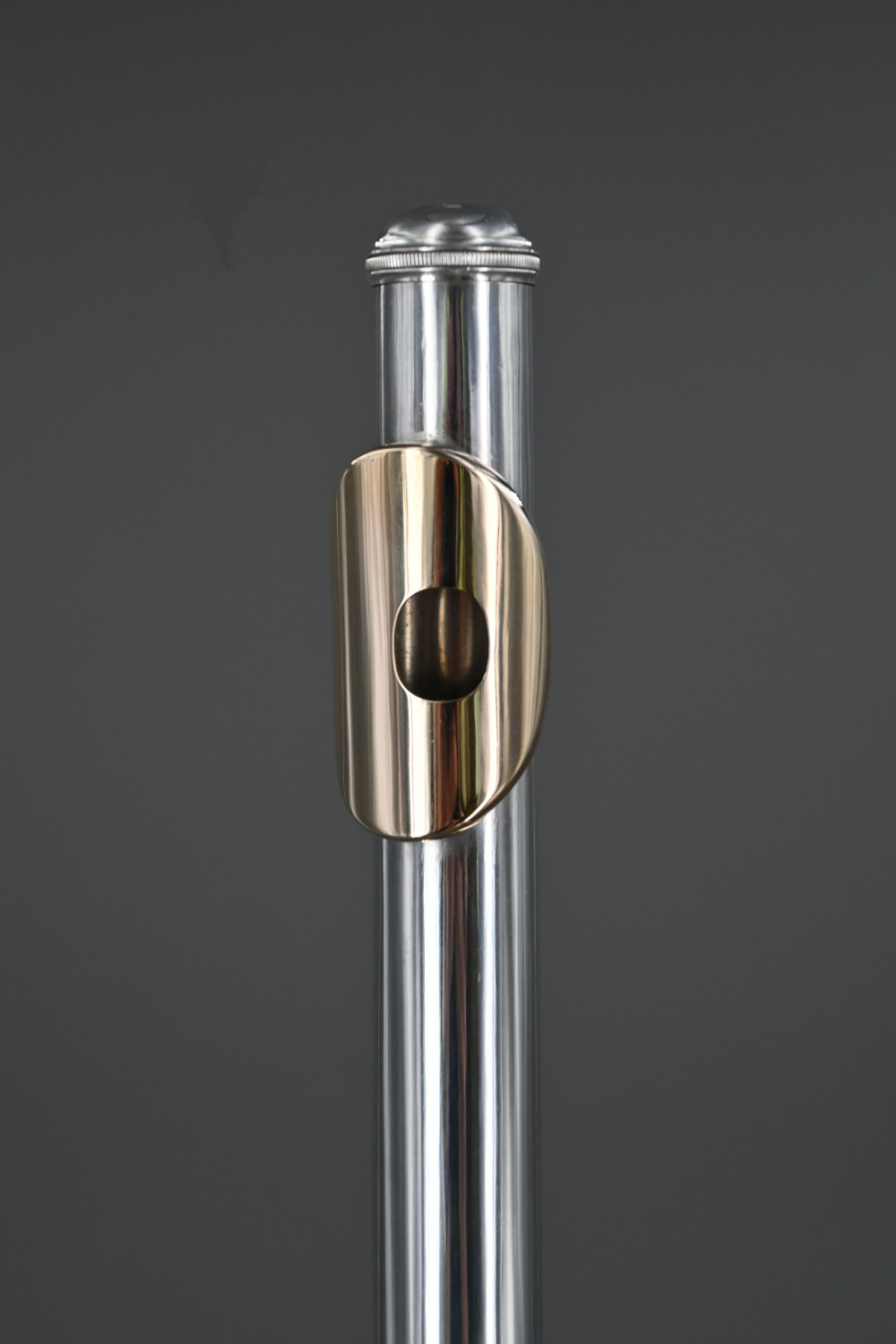 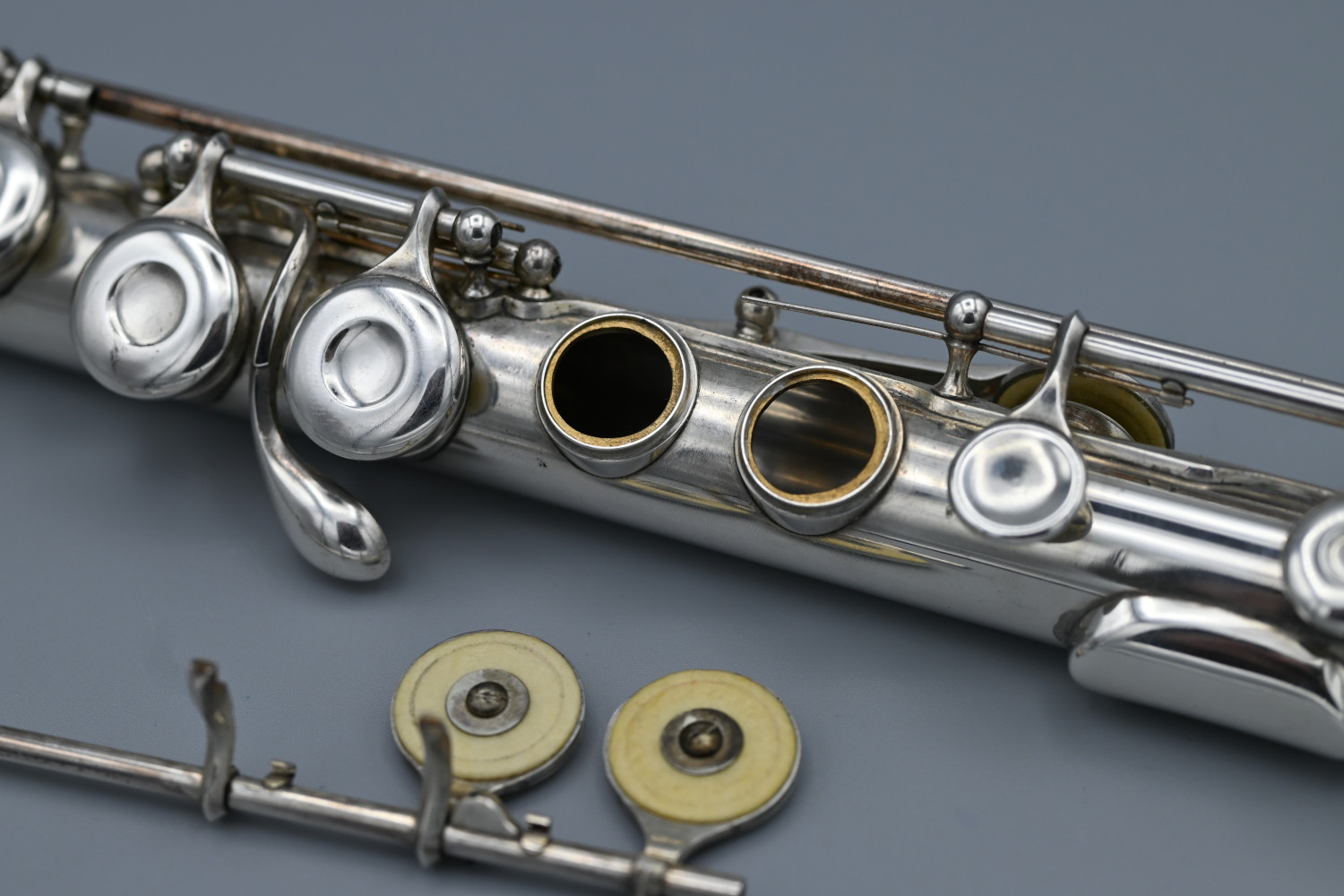 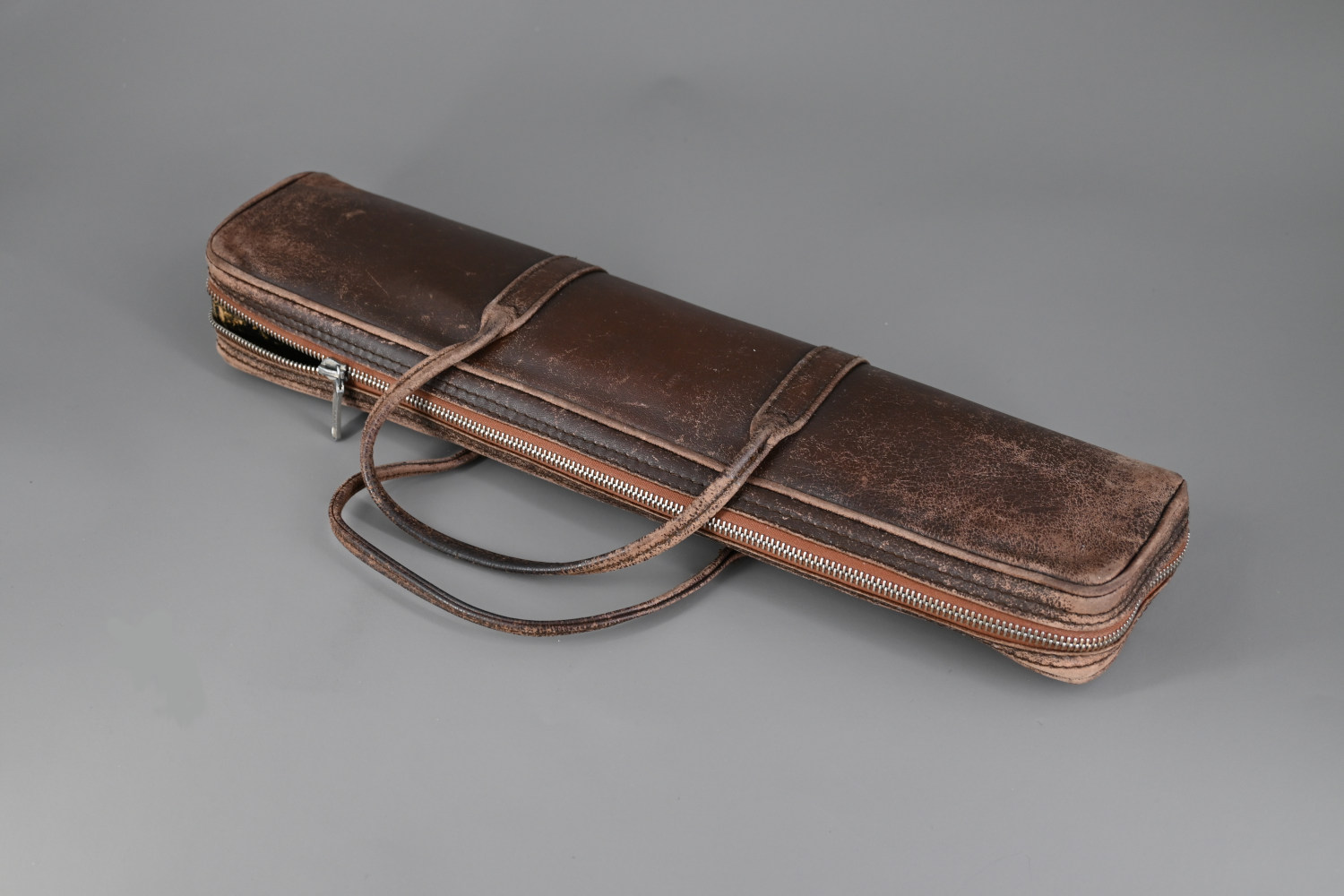 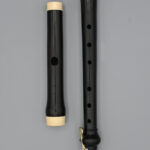 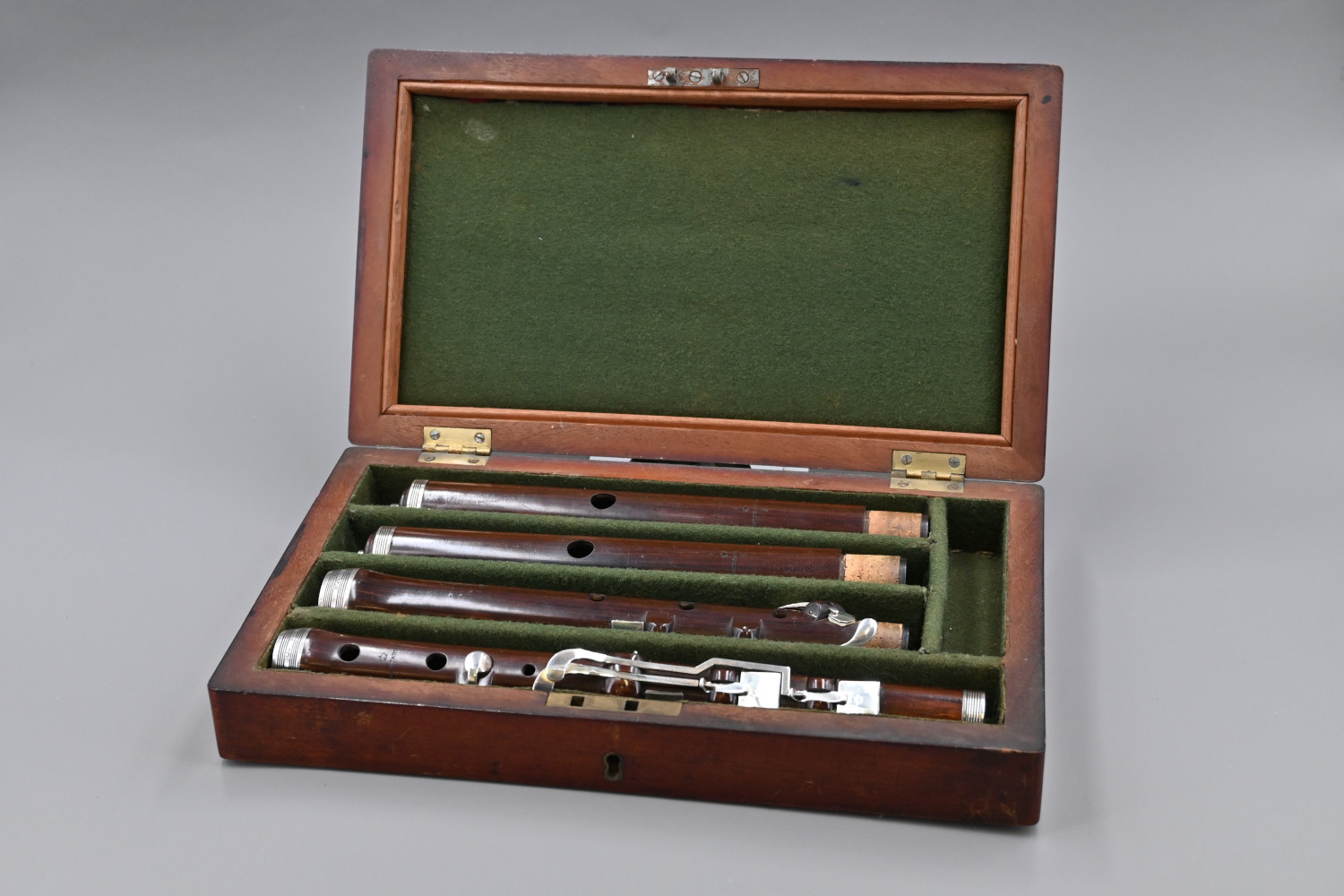 Here we have a jewel of silver flutes… which is also extremely rare! It was made by Ernst Robert LEIBL (1871-1957), who took over the famous Boehm & Mendler workshop in 1903 and continued to construct his instruments in exactly the same manner. It is estimated that LEIBL only made around 100 flutes and perhaps just 20 may still be in existence today.  This flute dates from around 1910.

The flute is constructed of solid silver, featuring soldered tone holes, gold springs and a gold lip plate and riser. Only the crown and screw cork are not original. It is supplied in its original wooden case (damage to the lock and no key) and leather zip case cover.

The instrument belonged to a professional player and has very good playing characteristics, which are typical of this late nineteenth/early twentieth-century model of flutes. The sound epitomises bright shininess and elegance.  The flute plays at a pitch of a=439 Hz with the head joint completely inserted.

In terms of condition, the flute is in playing/working condition and was overhauled some years ago. Some of the tone holes at the top of the instrument were inlaid with metal washers to correct the instrument’s intonation [see photos]. These washers are not original and can easily be removed. Some personal, minor adjustments may also have to be made by the instrument’s new owner. So… in a nutshell… this flute is ready for some serious music-making.

Unlike the flutes by Theobald Boehm (1794–1881) and Boehm & Mendler, this particular flute has a closed G-sharp key . This means that it can be played like a regular modern flute. So, it’s the perfect choice for anyone who ever wanted to own and play on an original flute which forms part of the Theobald Böhm, Böhm & Mendler and Robert Leibl legacy.

has been added to your cart.
Checkout
G-sharp key

Open/closed G-sharp key
The open G-sharp key was promoted by Theobald Boehm. So, G-sharp is fingered like a G on the modern-day flute and G is fingered like the modern-day G-sharp. The open G-sharp key mechanism avoids having an additional second G-sharp tone hole, which is not optimal in acoustical terms.
The closed G-sharp key is the regular mechanism on modern day instruments as well as traditional conical wooden more-keyed flutes. G-sharp is obtained by pressing the G-sharp lever. G is produced by pressing down all four fingers of the left hand.
Theobald Boehm’s open G-sharp was not successful in the end and is no longer used in flute-making, with some exceptions.